Are Custom Heroforge Minis Worth It? 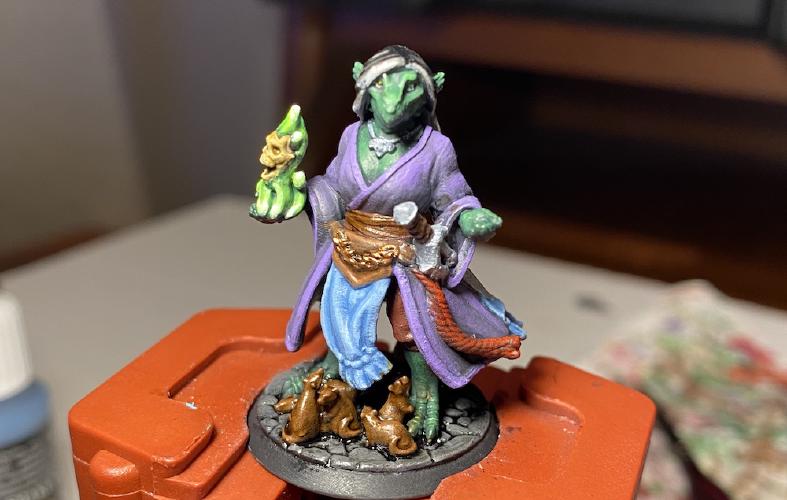 For this article, Annabelle and Matt teamed up. Annabelle created a miniature to represent her character, a dragonborn warlock named Scumrabbit. Matt then painted the miniature. In this article, they give their combined thoughts about HeroForge.

HeroForge provides a browswer-based designer in which you can create a custom miniature. You can then have HeroForge 3D-print the miniature for you, or you can buy a digital file and print it yourself.

We designed a custom mini, and then ordered a premium plastic version of the mini from HeroForge. When it arrived, we painted it up. Here are our thoughts on HeroForge.

Creating the Mini on HeroForge.com

Annabelle wanted to design a mini that matched her dragonborn warlock, not just in physical appearance but in attitude.

My character, Scumrabbit, is a dragonborn with attitude. She’s chaotic in every sense of the word. Sometimes she makes impulsive decisions, putting her party at risk. But sometimes she’s in it for the long game. Sometimes she’s tender-hearted (and she has a band of loyal kobolds that worship here). Other times, she’s cold and ruthless. I wanted a mini that represented both her softer side and her harsher side.

I started with a half-dragon model.

A half-dragon definitely represents the typical dragonborn in DnD. It has the right look and feel. But lizardperson had softer facial expressions, which was what I wanted. So I switched.

From there, I got to customize. Everything from eyes and hair to clothes and weapons is customizable. I was particularly pleased with the way the face and hair came out. “Feminine” and “dragon” are not words that seem to naturally combine.

When it came to clothing and weapons, there were several elements that I wanted on my mini:

Walking through the dozens of options, I created a mini that matched my character. It took me about an hour, and I did the whole thing on my phone.

I ordered the premium plastic so we had the best surface to paint on.

The 3D printed mini arrived in the mail a few weeks later in a clearly marked HeroForge box. My mini was wrapped in bubble wrap with a printed label that pictured my mini.

After picking it up from my mailbox, I immediately unwrapped it. It looked great, and the plastic felt nice and sturdy with a little bit of heft to it.

The premium plastic is black, which looked great even unpainted. I love the details–especially the spell effect in her hand and the little swarm of rats by her feet.

The outfit came out looking great, too. I love the tassels on the back of her dress.

In the sunlight, I could definitely see the band lines. But indoors I don’t think they would be visible except up close under bright light.

When Annabelle gave me her mini to paint, I asked her several questions about the colors she preferred. She pointed out some of the details of the mini. The necklace, for example, was intended to represent a necklace in our campaign. She also specifically requested a white shock of hair.

When I sat down to paint, I discovered that I was out of primer (and so was the local hobby store). So I tried laying down an undercoat with Army Painter black paint. It adhered great, and when I tested it later, I didn’t get any chipping. My conclusion is that it is possible to paint these without priming, provided you are using good quality paint.

Many tabletop minis are 28mm scale. This is the default for Reaper and WizKids, for example. But HeroForge prints at a slightly larger 30mm scale. I compared it to a few minis I had ready at hand. I noticed the difference, but it was not disruptive. (We have since played a game with a mixture of 28mm and three HeroForge 30mm minis, and the scale mismatch is definitely not a big deal).

Painting was a pleasant experience. There were not a lot of hard-to-reach places, likely because the printing process would not support those flowing capes that you get on WizKids minis–you know, the ones where you can never manage to get a brush up between the cloak and the shoulder blades.

Importantly (in my mind), the eyes were slightly over scale, which made it possible to paint them well. That is a great feature. The eyes convey so much personality. If you’re going to get a custom mini, good eyes make a load of difference.

There were a few oddities in the print:

Even with these small issues, though, the mini was a pleasure to paint.

Are HeroForge Minis Worth It?

All told, our mini (printed on premium plastic) ran just around $30 plus shipping. That is substantially more than the typical off-the-shelf mini. But getting a mini that matches your own vision of your character… that’s totally worth it.

You can save a bit by ordering the base level plastic. That shaves off about $10, and the mini also comes primed. But we haven’t tested this option.

HeroForge also has an option to print the minis in color. Then you do not have to paint them. These run about $25 more than base plastic.

And if you really want to go premium… you can have your mini printed with a bronze finish for around $100. Perhaps that would make a fine memorial to a hero fallen in battle with an ancient red dragon.

But the bottom line for us is that HeroForge created a fun experience for creating an extremely personalized mini, and then delivered the goods with a high-quality 3D print. 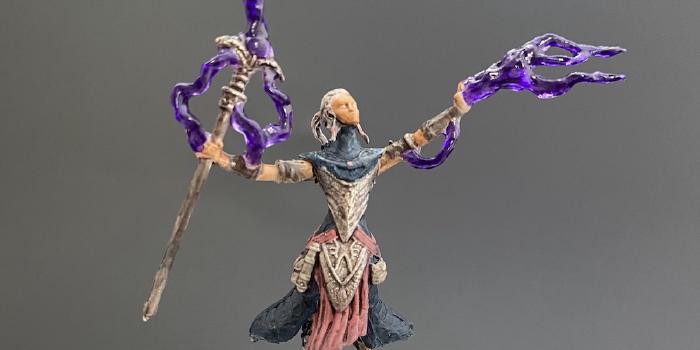 You don’t need to be an artist to paint your own miniature. This guide walks through an easy process for painting a character that is ready for the tabletop. Budget about 3 hours and $30. 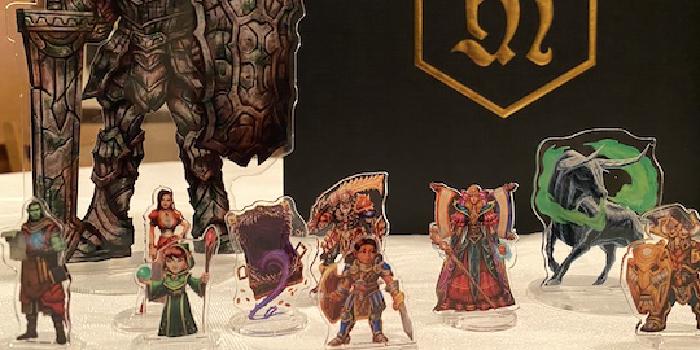 Want a load of tabletop minis without having to paint a single thing? Want to store them in a compact binder? Skinny Minis might be the solution for you.

There are many great things about getting back to tabletop play. But we were missing the flashy encounter maps we used on Roll20. So we looked into printing full-colored maps. Here’s what we learned.