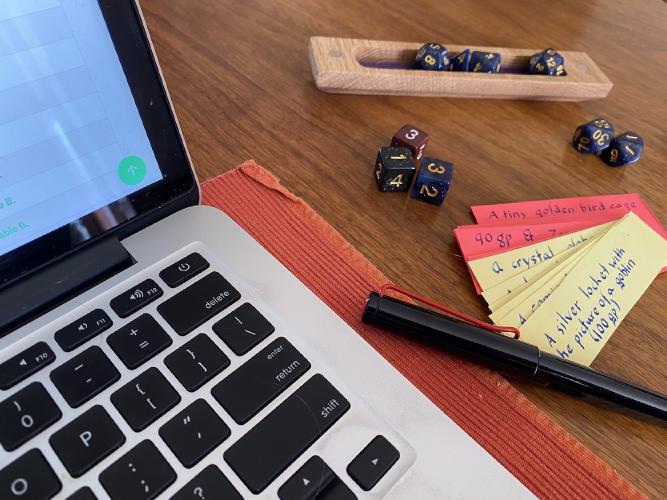 They’ve just spent the last few hours battling a dozen guards. Now they’re looking for some remuneration. And you know the paladin has her heart set on that +2 shield she saw at the smithy. But you hadn’t planned any treasure.

This is where we’ve found hand-made treasure cards to be valuable. Budget 30 minutes or so to make these. You are not likely to need to purchase any materials.

Coming up with treasure on-the-fly can lead to mistakes. You may overcompensate… or not give your players what they deserve. The Dungeon Master’s Guide has some great roll tables for generating appropriate treasure. But pulling out roll tables in the middle of the game is a tedious. Also, it’s nice to throw in some creative flare.

A hand-made deck of treasure cards is an easy way to make looting fun and profitable for your players. The idea is to create a deck or two of “treasure cards” that you can dole out at a moment’s notice. This how-to explains how we built ours. Feel free, of course, to do it however you want.

We built two decks for this example: One for low challenge-rating (CR) enemies and one for higher CR enemies. They vary by value, with the higher CR enemies typically having more valuable treasures.

You’ll only need a few basic supplies for this:

We broke the process into four steps:

Step 1: Cut a bunch of cards

The first part is easy: Just cut a bunch of similarly sized cards. You want to be able to mix them up pretty easily, so similar size helps with that. And you want enough space to write a sentence. 3"x5" note cards are probably the biggest you’d like to go.

We had some scrap paper left from printing Companion Cards, so we just used that.

You probably want at least eight cards per deck. And you probably don’t need more than a couple dozen.

Building some treasure cards for CR 0-4, we need to roll twice per treasure: Once to get the tier (d%), and then again to get the specific number of treasures.

Using this random table, you’ll get some really valuable ones. You’ll also get some duds. One of ours is just a few copper pieces.

We kept a piece of notepaper at hand, rolling and recording a few dozen results. Admittedly, we did fudge a few roles. (When you’re the DM, you make the rules. Therefore, it is impossible to cheat.)

It can get repetitious for players to just get coins. And also, that’s neither intriguing nor realistic. Is a marauding orc more likely to carry around a carefully organized coin purse or a random assortment of valuables they scavenged during a raid?

At least some of the time, we like to convert the coins into gems, valuable items, or even just different denominations (e.g. 20sp instead of 2gp).

The Dungeon Master’s Guide has a Gemstones table that is a convenient reference. It also has some great Art Objects tables. And if you need a refresher, the Player’s Handbook has coin exchange rates.

It is perfectly fine to write a card that says:

But we wanted these to be sorta quirky and fun. So on some of the cards we embellished.

Wouldn’t it be funny for the adventurer to loot the body and find a bunch of little bags, each with a little bit of money? That might trigger some interesting thoughts. “Why are there ten little bags? Were they supposed to be gifts? Or some peculiar budgeting method?”

And what if each one contained a note? What if the note was just one ambiguous word?

That’s how we ended up with the text:

A large bag containing 10 small pouches, each with 10 sp and a note that says, “smile”

Here are a few ideas to get you going:

Here are a few more examples of cards we came up with. Some of these were from our low-CR deck, others from our high-CR deck:

160 gp in a coin pouch shaped like a fish

And a personal favorite:

A silver locket with a picture of a goblin (100 sp)

From here, it’s just a matter of writing down these ideas on your cards.

Using Them In Play

During play, you (the DM) can draw cards as needed. Don’t feel like you need to use these every time a player loots a body. And, of course, if you draw a card that doesn’t feel right in the moment, feel free to re-draw. The goal, after all, is to tell a good story for the enjoyment of your players.

Some of our cards are pretty generic (“A bag of 17 cp”). Those cards tend to get recycled into the deck.

But for those unique ones(“A tiny birdcage made of electrum (200 gp)"), we tend to use those only once, either giving the card to the players, or just tossing it out. On occasion we have to replenish the treasure decks. 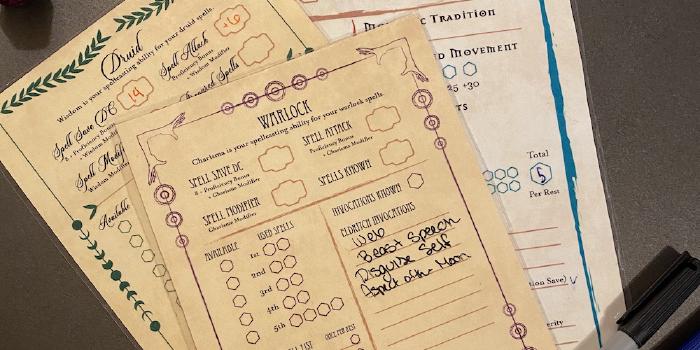 Companion cards are a brilliant player reference that deserve a spot on your table. 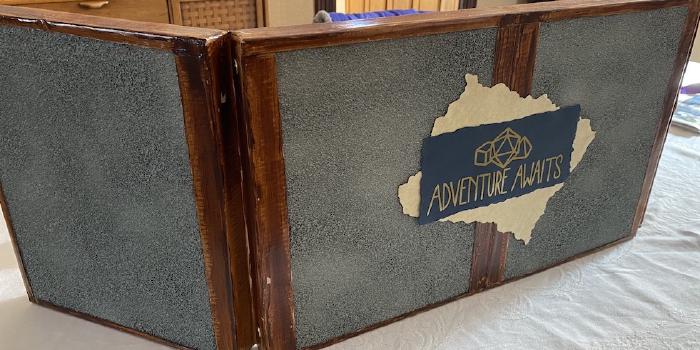 A DM screen says a lot about a DM. So when we set out to build one, we wanted to make it look fancy (even though it was cheap).